Okay, so there is this girl named Marcella Shimizu that I met at school last year. She’s cute I guess. The best thing about her is that she seems to like me. Her dad died recently and she’s been living alone which is pretty cool also. It’s given us a place to hang out without my mother hanging around. If I said the two of us haven’t fooled around, I’d be lying. Hell, I already said she is cute and she likes me. I don’t like her enough to make her a girlfriend or anything like that. Just a friend with benefits. Well that’s what it was until she came over to my house today. It was like Myla all over again. Once she told me she was pregnant I walked away. I am not ready to be a dad yet. And anyway, if she’ll just sleep with me without a commitment, how do I know she isn’t sleeping with other guys? That baby could belong to anybody.

That didn’t exactly go as I planned though. My mother overheard our “discussion” and had other plans. She invited Marcella to move in with us. So now this woman who claims to be knocked up with my kid is living with us. This is really going to put a damper on my life.

I tried talking to Mom to get her to change her mind, but she refused. The one time she tells me no in my entire life and it is about this. I hate it.

At least the damn stuffed animal in the nursery won’t talk back to me. 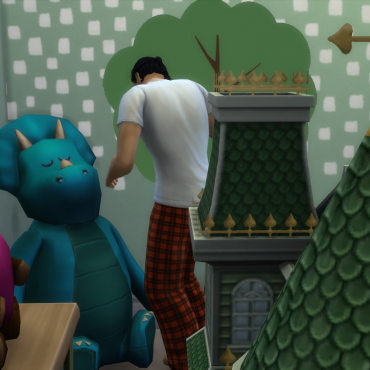 It is times like this when I really miss my dad. I know he wouldn’t let Marcella move in without proof that the kid was mine.

I swear the people responsible for Dad’s death is going to pay.

While Anthony was crying at his dad’s urn, look who was nearby watching.